EnGro maintains its ability to service local (both bulk and bag) sales competitively via its state-of-the-art bulk terminal located at Jurong Port on Pulau Damar Laut’s (PDL). The Cement Terminal is served by two dedicated berths, each with a 40,000 deadweight tonnes capacity and three sophisticated screw-type unloaders, each with a maximum rated capacity of up to 800 tonnes per hour.

The terminal has a storage capacity of 60,000 metric tonnes in two silos, – Duo-Cell and Multi-Cell configuration. All 9 cells have different storage capacities for delivery of different types of specialty cement in volume. It is designed to handle annual throughput of 1.2 million tons.

Serving as an extention to our bulk terminal operation, the RMC arm, Top-Mix ready-mix operation, is rapidly expanding to meet the strong demand in Singapore shown by the turnaround in the real estate market as well as the buoyant Singapore economy.

While we continue to strengthen our Cement and RMC business in Singapore, Top-Mix Concrete (Malaysia) operation has expanded rapidly from the acquisition in 2011 with only one dry-mixed RMC batching plant, it has since expanded to several RMC batching plants equipped with the latest computerised batching system, strategically situated at strategic locations throughout Southern Johore region. The setting-up of these batching plants were timely as it enabled Top-Mix Concrete (Malaysia) to tap on the growing development of Iskandar Development Region (IDR) which witnessed many iconic projects being launched in the last two years.

With the commitment of Malaysia government and investors’ growing confidence in Johor Bahru IDR developments, we expect Top-Mix Concrete (Malaysia) to be able to expand its operations further and benefit greatly from the positive growth prospects of the IDR. 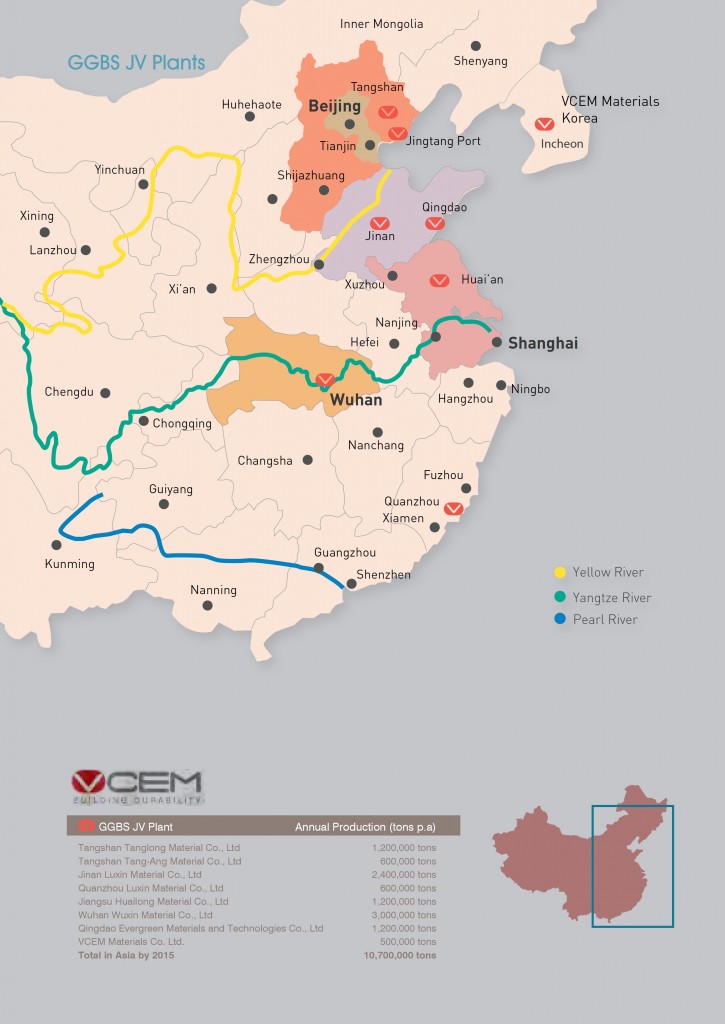 Our GGBS Business
Our outward-looking strategy since 2002 has brought us into North Asia, in particular, China followed by an investment in South Korea. Thus far, performance of our respective Ground Granulated Blast-furnace Slag (“GGBS”) joint ventures (“JVs”) in China are encouraging and continue to expand. At present, our GGBS capacity has reached 10.7 million tpa in North Asia.

We recognized the need to have a long-term presence in China and the importance of positioning ourselves in an emerging economic zone within China as well as establishing partnerships. Presently, China is enjoying enormous benefits from its continuing rapid economic development, and our investments in this transitioning market promise attractive returns.

The 5 key locations of our GGBS growth
Our GGBS plants in China are located in 5 provinces, namely, Hebei province, Shandong province, Jiangsu province, Hunan province and Fujian province. These provinces form the Beijing-Shanghai corridor which has a combined population of close to 200 million people.

Located in Fujian Province, the Quanzhou Luxin plant came to being as a result of efforts by Jinan Luxin which took the initiative opportunity to grow beyond Jinan city and Shandong province. Lying 130 km north of Xiamen (厦门), the plant faces Taiwan across the Taiwan Strait. Quanzhou plant is the fifth mill operated under the wings of Jinan Luxin and is located within the Quanzhou Shage Port, a deep-sea port capable of handling 70,000-ton vessels. This facilitates the receipt of raw slag thus lowering cost, and is well placed strategically to capture a market where GGBS is in demand.

The Group established three Joint Ventures (JVs) in Changshu City (常熟) in Jiangsu Province China, for the manufacturing and sale of ready mixed concrete (RMC). With a total production capacity of 900,000 cubic metres per annum, our Changshu JVs are leading players in Changshu City.

Our Changlong JV has won numerous accolades including “Best Enterprise” from the Suzhou Building Association, “Leader in Construction Industry” from the Changsu City Development Authority, and was awarded the Bronze award by Lu Shan Town government for contribution to the city.

Brief profiles of the above RMC companies are as follows: