Our GGBS Business
Our outward-looking strategy since 2002 has brought us into North Asia, in particular, China followed by an investment in South Korea. Thus far, performance of our respective Ground Granulated Blast-furnace Slag (“GGBS”) Joint Ventures (“JVs”) in China are encouraging and continue to expand. At present, our GGBS capacity has reached 11.4 million tons per annum (“tpa”) in North Asia.

We recognised the need to have a long-term presence in China and the importance of positioning ourselves in an emerging economic zone within China as well as establishing partnerships. Presently, China is enjoying enormous benefits from its continuing rapid economic development, and our investments in this transitioning market promise attractive returns. 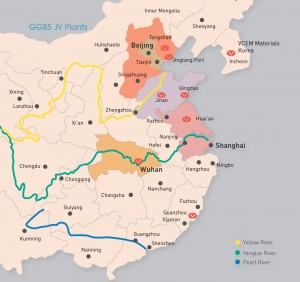 The 5 key locations of our GGBS growth
Our GGBS plants in China are located in 5 provinces, namely, Hebei province, Shandong province, Jiangsu province, Hubei province and Fujian province. These provinces form the Beijing-Shanghai corridor which has a combined population of close to 200 million people.

Located in Fujian Province, the Quanzhou Luxin plant came to being as a result of efforts by Jinan Luxin which took the initiative opportunity to grow beyond Jinan city and Shandong province. Lying 130 km north of Xiamen, the plant faces Taiwan across the Taiwan Strait. Quanzhou plant is the fifth mill operated under the wings of Jinan Luxin and is located within the Quanzhou Shage Port, a deep-sea port capable of handling 70,000-ton vessels. This facilitates the receipt of raw slag thus lowering cost, and is well placed strategically to capture a market where GGBS is in demand.